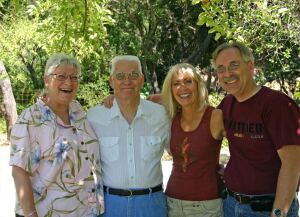 Doris Gene Williams was born August 15, 1926 in Urbana , Illinois to Glenn Simon Tolson and Gladys  (Shepard) Richardson.  She passed away quietly at home in Rocklin, California on December 12, 2021, in Rocklin, California.  She was 95 years old. Known by her daughter Patricia Anne as “Mom”, her nieces and nephews as “Aunt Doris”, and her friends as “Gene”, she was a choice daughter of our Father in Heaven. Both of her siblings, Nancy Tolson Dennison, and Richard Tolson preceded her in death, as did her husband, Edward John Williams, and daughter, Patricia.

Gene was a bashful, shy child but enjoyed horseback riding and tap dancing.  When she was young she had a colt named “Sparky”. She didn’t care much for school, but loved going out on her mother’s uncle’s (Carl) farm to ride the manure spreader.  He made her some stilts which she really loved.  As an adult, she always joked about how “short-legged” she was and probably wished she still had those stilts!

Gene was married the first time, very young at the age of 17 to Leroy Bennett Junior in 1943 in Litchfield, Michigan. He was tall and 4 years older.  Shortly after, she fell down a hay chute while she was out in the country visiting.  She walked over a hole that was covered with hay, and fell 35 feet and broke her back. Her mother in law was very kind and took care of her while she recovered.

She later married Edward John Williams on September 8, 1951.  She met him in Colorado Springs while she was working at a ranch cafe.  She served him coffee and he asked her out.

When she and Ed lived in West Sacramento on Palomar Street, the missionaries of The Church of Jesus Christ of Latter-day Saints knocked on their door.  They taught them about the restored gospel and they decided to be baptized on June 4, 1966. She was very proud to be a member.  She served as the Relief Society secretary and in the Primary organization, among other things.

Ed was in the Army, and then the Air Force and was stationed at McClellan AFB in Sacramento, CA.  He worked in electronics and communications. They adopted their beautiful baby daughter, Patti. When Patti was young, they bought her a Tennessee Walker (horse) named “Shybo”. They also raised beef and chickens. Gene’s husband Ed died of a heart attack in his late 40’s and Gene never remarried.

For 15 years, Gene dedicated her time as a volunteer cleaning, repairing, and pricing the jewelry that was donated to the Roseville, CA Hospice Thrift Shop on Harding Blvd. Prior to that she worked in the china, crystal, and silver department in a department store.

Gene herself was a breast cancer survivor.

She loved fishing, gardening, BBQ spare ribs, Denny’s, ice cream, Hawaiian pizza, red roses, reading Debbie Macomber romance novels and Louis L’Amour westerns, dogs and horses, old movies, Christmas lights, navy blue, anything by Bing Crosby, yard sales, Walmart, anything chocolate, and pecan pie. One of her very favorite songs was “When the Moon Comes Over the Mountain”. Some of her favorite sayings were, “Don’t take any wooden nickels”, “Don’t bust a gut”, and “Be careful out there”. Gene loved to joke around, but also gave the best advice you could ask for. She often talked fondly of her friends and the two great trips she took with them to Hawaii.

Gene was known by her friends to be very direct and no-nonsense, but her seemingly hard shell was easy to crack and then she was the most loving, loyal friend one could hope to have in this life. Gene’s friend and neighbor Judith (when she lived on Shannon Bay Drive, in Rocklin) summed up Gene a few years ago by saying, “She is the most genuinely nice person.  It’s not that she overlooks the negative in people, she simply doesn’t see it.”

She is interred in the Roseville, CA cemetery beside Ed and Patti.